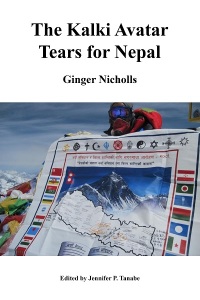 I was approached to work with Ginger Nicholls on a book about her experiences as a Unification missionary in Nepal a few months ago. At first I was hesitant, not knowing what to expect and being rather ignorant about Nepal. But now I have confidence that Ginger and her husband John, who surely deserves a significant amount of credit for its completion, have created something of great value. This publication does far more than merely document the growth of the Unification Movement in Nepal since 1997. It is a memoir written by a missionary who, together with her husband, sacrificed and shed tears for the nation of Nepal, giving her heart and soul for fifteen years.

Like all memoirs, it is the events that impacted the author most deeply that are featured. They are brought to life in Ginger’s voice, heartfelt and often humorous, as she describes the challenges of daily life as well as the determination to accomplish spiritual goals in the face of difficulties both external and internal.

Although I had joined the Unification Movement around the same time as Ginger, and so we have many experiences in common, I had not traveled to another land as a long-term missionary and did not expect to recognize my life in her writing. In reading her account of life in Nepal, though, there was a moment when she mentioned the kerosene fumes from the heater and it brought back memories of the kerosene heaters that I had encountered in Korea. I had received an assignment to a small town in Korea, part of an outreach effort related to the re-unification of North and South Korea, and went there for two weeks with my husband and daughter and a number of others from the United States (a multinational collection of members who happened to live in the US) as well as a group from Japan. We stayed in a small center that was little more than the home of the Korean church leader and his Japanese wife and their children, sleeping on the floor of the room used for services, and going to the public bath every morning if we woke up in time. It was winter and very tempting to stay in the sleeping bag and skip the bath!

We were taken in a van every day to a small town or village in the area to invite people to come to a presentation on re-unification, and then we were the “main attraction” of the event every evening. Some of the villages were very small. In particular the one that I had picked from the lottery as my special area was hardly more than a general store/post office and some houses surrounded by farm land. The meeting room had an inadequate kerosene heater so most of the guests had blankets to keep themselves warm as they huddled on the floor. I was the one chosen from the American party to give a short talk, which I began in my limited Korean and the main part was “translated” by the Korean church leader. In fact, he read a text written by his wife who had translated it from Japanese into Korean, after one of the “American” members who was Japanese and spoke excellent English had translated my text into Japanese. This had all been done late at night as soon as we arrived, so I have no idea how accurately my words were presented in the Korean version! It seemed not to matter, though; most of the guests were happy just to see us “Americans” and we even sang a song or two for them. They were even happier to receive a “thank you gift” afterwards, which we handed out with big smiles. The gifts were usually towels, but in the most rural areas they were packs of toilet paper! Apart from the smell of kerosene, one of my cherished memories of this time is of those villagers returning home clutching their packs of toilet paper, riding in wagons pulled by tractors.

Ginger’s story is very different from this of course, but being reminded of my own experience somehow validated the authenticity of her account of life in a land about which I had no personal knowledge.

Also, I knew little of Hinduism when I started this project. Apart from having many gods, and cows being sacred, I only knew of the greeting “namaste” which a colleague at an interfaith gathering had explained means “I bow to the divine in you,” something that rather impressed me at the time. And I had never heard of the Kalki Avatar! Now I know he is the tenth incarnation of Vishnu. Riding a white horse named Devadatta and carrying a sword, he comes to vanquish evil and usher in the Golden Age. Basically, he is a messianic figure, akin to the Second Coming of Christ.

Reading Ginger’s text reminded me that there are universals found in all religions, truths that resonate with us all. This brought home to me how we really are one human family, albeit a large and diverse family, and that the dream of a peaceful world is surely possible. Hopefully this publication contributes even in a small way to the realization of that dream.

My husband was inspired to create these pieces of art that show the scene as the Kalki Avatar rides in on the clouds holding high the sword of truth, accompanied by his faithful followers. In the first, Lord Kalki appears clad ready for combat, while in the second version he and his followers appear more spiritual, but still ready to take on the evils of the world.